Is drinking ice cold water bad for your health?

It is said that 'Long time drinking of ice-cold drinks can cause a lot of health problems, such as over weight, cough, headache, stomach problems, weak immunity, infertility etc.' and the reason is:

The average normal body temperature is 98.6°F (37°C). The ice drinks will bring down the temperature and slow down the energy and blood circulation inside the body. The coldness can be stuck somewhere in the body due to constant ice water intake, this will cause energy blockage. If the blockage occurs in the lower abdomen (which often happens to females), where uterus and ovaries are, many female related diseases and problems could appear including infertility and aging faster.

If the energy circulation slows, the metabolism slows, over weight is the result of that. 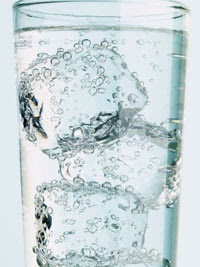 Aging and diseases are all the results of either slowing or blockage of energy inside of our body. Low temperature is one of the causes.
A cup of ice water may make you feel heavenly after a sweaty exercise or at the time you feel really hot. But that cup of water could hurt you 10 times more due to the sudden cooling inside your body especially if you quickly finish it.

According to Ayurveda, ice cold water or drinks hinder the process of digestion and slow down the Jatharagni (digestive fire). As a result, food is not digested properly, leading to the formation of sticky toxic material (ama) in the small intestine. Other effects include under nourishment and blockage of body's channels (srotas), which can further lead to hundreds of diseases.

Ice cold water is very bad for patients because their digestive fire is already weak due to low levels of immunity.

According to Ayurveda, you should always drink water at normal room temperature. If you live in very hot climate, you can drink slightly cool water. And the best is to drink lukewarm water. It helps in enhancing the process of digestion, clears the accumulated toxins, opens up the blocked channels, and balances Vata and Kapha (Ayurvedic humours representing Air and Water). If you are suffering from Pitta diseases (such as skin rashes, burning sensation, hyperacidity, etc.),

There is an urban legend that if you drink cold water, especially after eating, you’ll get cancer. The theory, which has been widely circulated via email, suggests that cold water solidifies fats you have just consumed, quickly causing toxins to create cancer in your body. Sites devoted to proving or disproving urban legends, like snopes.com, have defeated this theory quite effectively.

* A discussion at a health forum: Is ice water bad for u?
Posted by Unknown at 9:48 AM 4 comments:

How to Get Happiness from Within and Get Health Plus Longevity?

Real happiness comes from inside, and we know that happiness brings health plus longevity, but how to get real happiness to stay healthier and longer? The simple answer may be to ‘be satisfied with your life as it is, and be thankful to God’. As happiness and sorrow are parts of our life we cannot choose only to be happy. But we can learn to be happy from within.

Happiness helps you bringing joy within yourself and spreading around you. This post helps you find ways to happiness and enables you to download valuable free ebooks. I have downloaded these priceless and valuable ebooks and realized that you have to pay a high price for the valuable stuff, but hats off to the authors of these books who devoted this information to mankind and shared it with all.

According to the World Health Organization, "Health is more than the absence of disease. Health is a state of optimal well-being." Optimal well-being is a concept of health that goes beyond the curing of illness to one of achieving wellness.

Fyodor Dostoevsky said: "Man is fond of counting his troubles, but he does not count his joys. If he counted them up as he ought to, he would see that every lot has enough happiness provided for it."

Read more: How to Get Happiness from Within and Get Health Plus Longevity?
Posted by Unknown at 12:41 PM No comments:

How to Get Help with Herbs in Detoxification Process and Be Healthy?

Detoxification can help us stay healthy. And herbs help us in detoxification processes, as they can improve our body’s capacity to deal with it.

What is detoxification?
The whole purpose of "detox" is basically a process of getting rid of unwanted toxins from your body. This is done by only consuming natural and healthy products including only eating vegetables and herbs and removing any other forms of saturated fats or carbohydrates from your diet.

Combining herbal cleanse products with eating more fresh fruit and vegetables can be beneficial for detoxification.
Neil Levin, of Now Food says: ""the science of multiple chemical sensitivity. This is the science relating to the concept that at some point the total toxic load upon the body, which is mainly processed by the liver, may overwhelm the body's ability to detoxify and safely excrete excess chemicals, whether natural or synthetic. The use of certain nutrients to be utilized in these processes – notably antioxidants, minerals and amino acids - are ‘limiting factors' affecting an individual's detoxification capacity and chemical clearance rates. Detoxification is far more than just drinking tap water".

Simon Mills makes the point that if one of the body's elimination channels is overloaded, or not functioning as well as it could, it can affect the whole interrelated system. This is why skin problems are often dealt with by natural therapists by changing the diet of those affected, and giving them herbal cleanse supplements.

Other factors that can contribute to an overloaded body include:


If food stays too long in the colon, it putrefies and produces more toxic by products. These can often be reabsorbed by the body, or at least produce irritation.

Erica Angyal cites these symptoms of an overburdened digestive system:


feeling very full after meals, especially if you haven't eaten much rumbling noises except the normal ones when you're hungry So, the benefits of an herbal cleanse, with an increase in fresh fruit and vegetables, is a great investment in your health. It's not really necessary to fast on juices or anything else. A long term, more gentle approach that encourages good eating habits and sustainable changes is better. Eating healthily, regular exercise and drinking plenty of water also helps your body become more efficient and you'll also be able to remove some of those excess fatty areas at the same time! Source article: Herbal cleanse

For more online resoruces and links:
First published : How to Get Help with Herbs in Detoxification Process and Be Healthy?
Posted by Unknown at 12:15 PM 4 comments: